The direct airport train is much faster than the one we took in to Tokyo. We did have some time before it left to use up money on our transit cards to buy random things from the various vending machines on the platform. It was startling to grab a hot can of milk tea when I was expecting a cold one.

The check-in agents were very confused by our lack of physical Vietnam visas in our passports so it took awhile for them to accept the paperwork to obtain an e-visa on arrival. The best part of Narita Airport is that they have couches to sprawl out on while you use their wifi. Some good food and beer later, we were on to Seoul for our layover.

Seoul International Airport is huge and it's filled with expensive international brands. The have about 6 different stores that just appear again and again every couple of meters. I had no interest in going into any of them.

I couldn't leave Korea without having a bit of food. Pork and Kimchi stew seemed Korean enough to satisfy me. So I sat eating my stew, drinking weird rice wine beer, watching K-Pop music videos, and wondering if I had just done everything I needed to in Korea. By the time the flight to Ho Chi Minh City left I felt the 2 hour layover was all I needed in South Korea for now.

I don't usual sleep on planes, but I'm sure I was asleep for part of the five hour flight. It was a pretty easy flight. North American flights don't serve free food on flights less than 3.5 hours in length, but in Asia even short flights will serve a proper meal for free (beer is free too!)

A visa was easily obtained on arrival. We had to give in our papers and wait for them to print it. I think they were mostly interested in the stamping fee. The taxi to the hotel was part of a scam. 400 000 dong (~$20 CAD) for a short trip. We were too tired to care much.

There was a drunk, angry Australian arguing with one of the hotel staff about room rates. I was happy to see the staff turn him down with a curt remark and flicking his passport back at him. Australians, am I right? The hotel room was alright. Our window overlooked the hallway, but that didn't really concern us since we were more focused on sleeps. 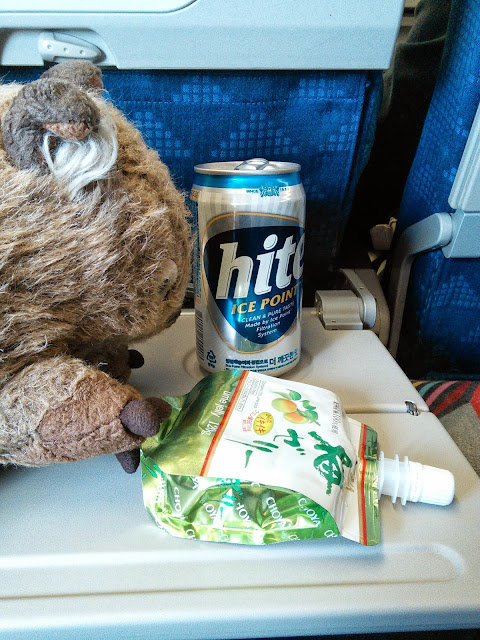